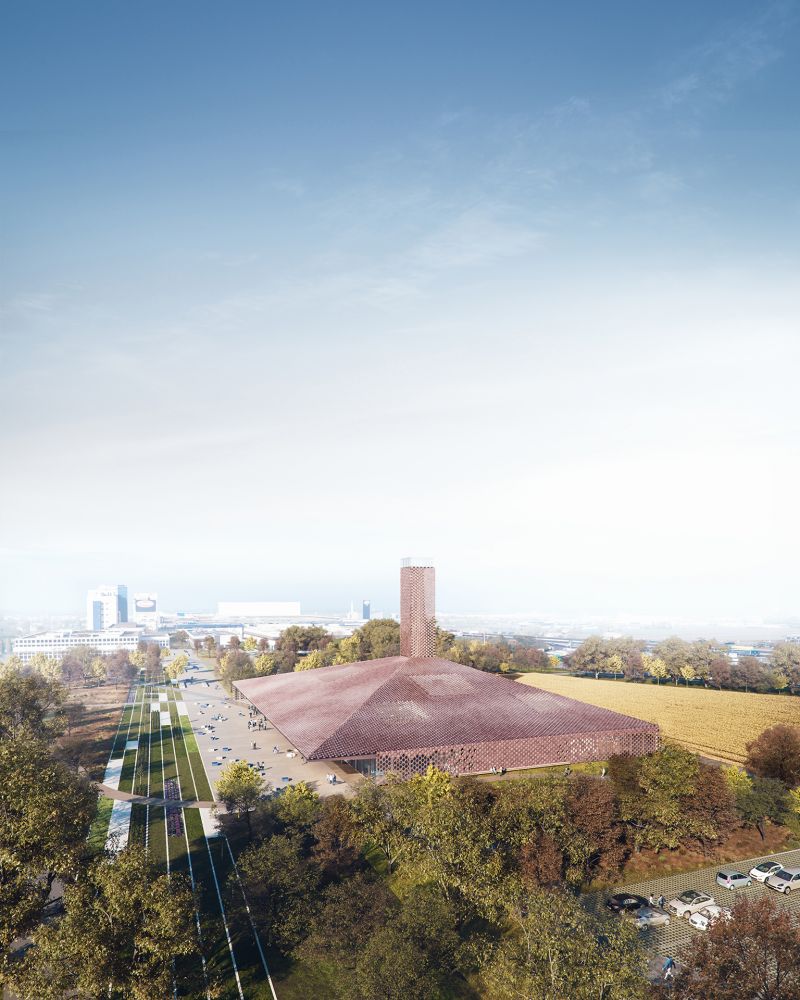 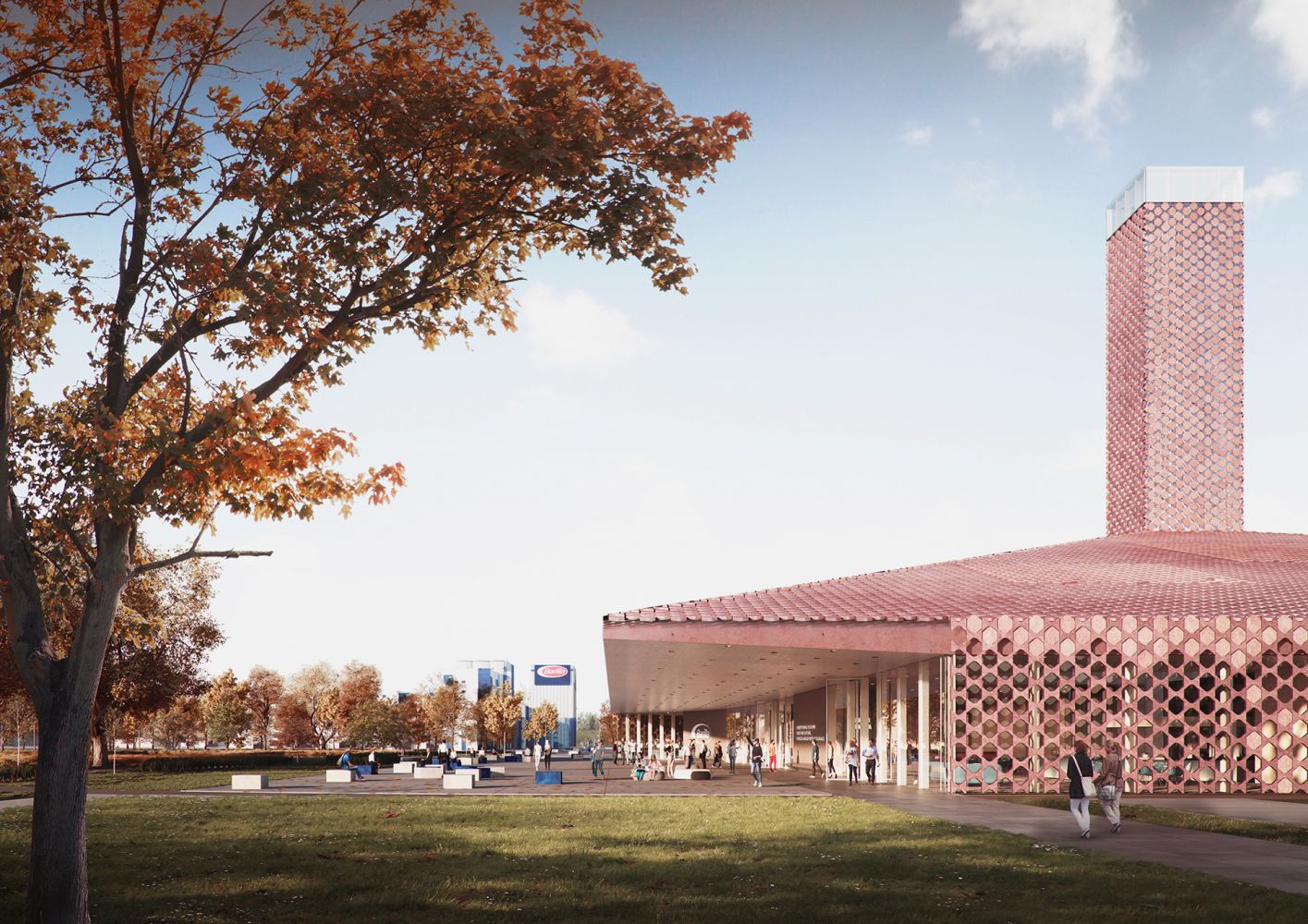 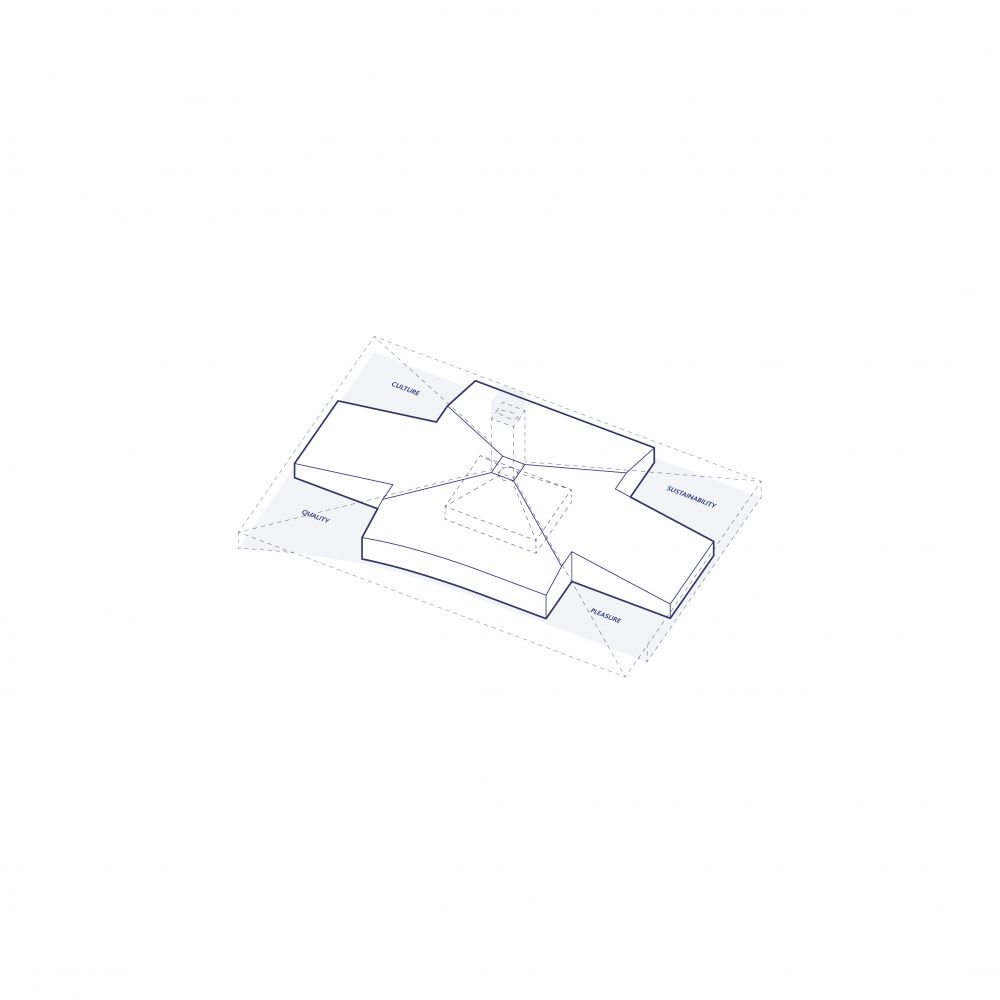 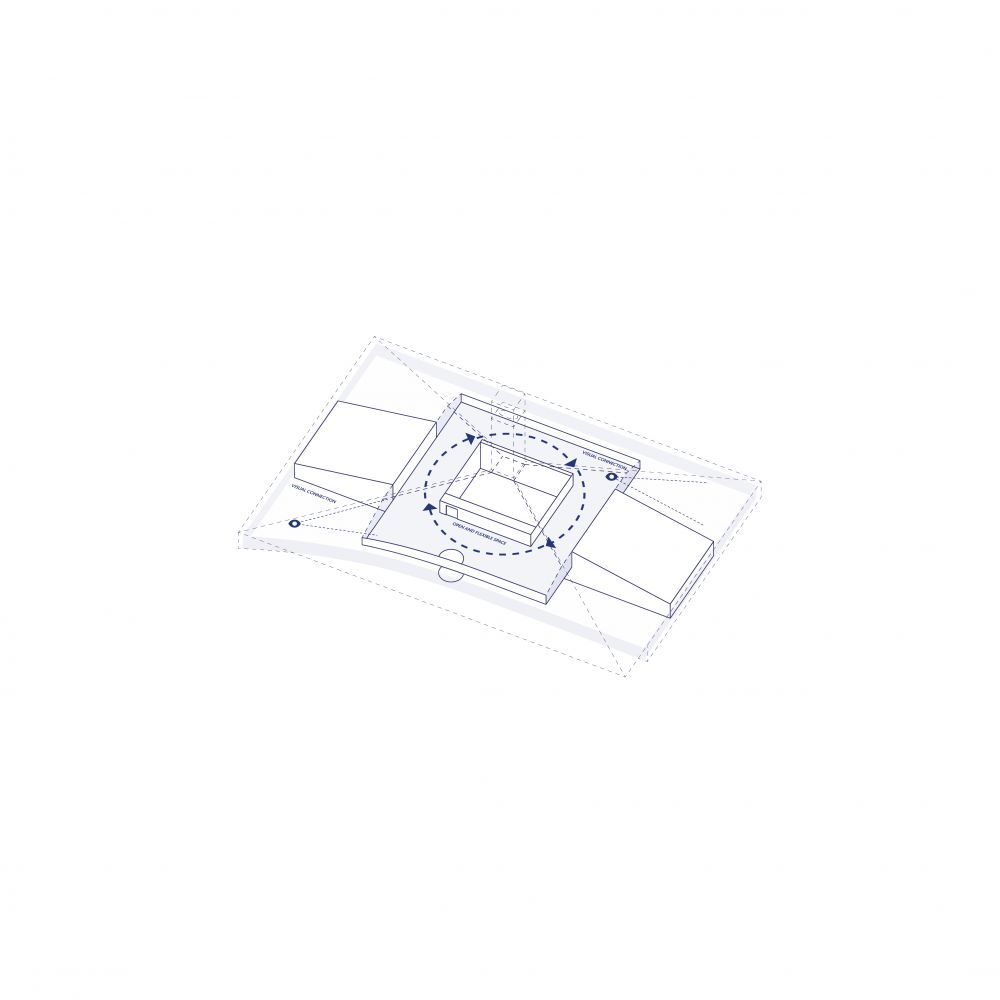 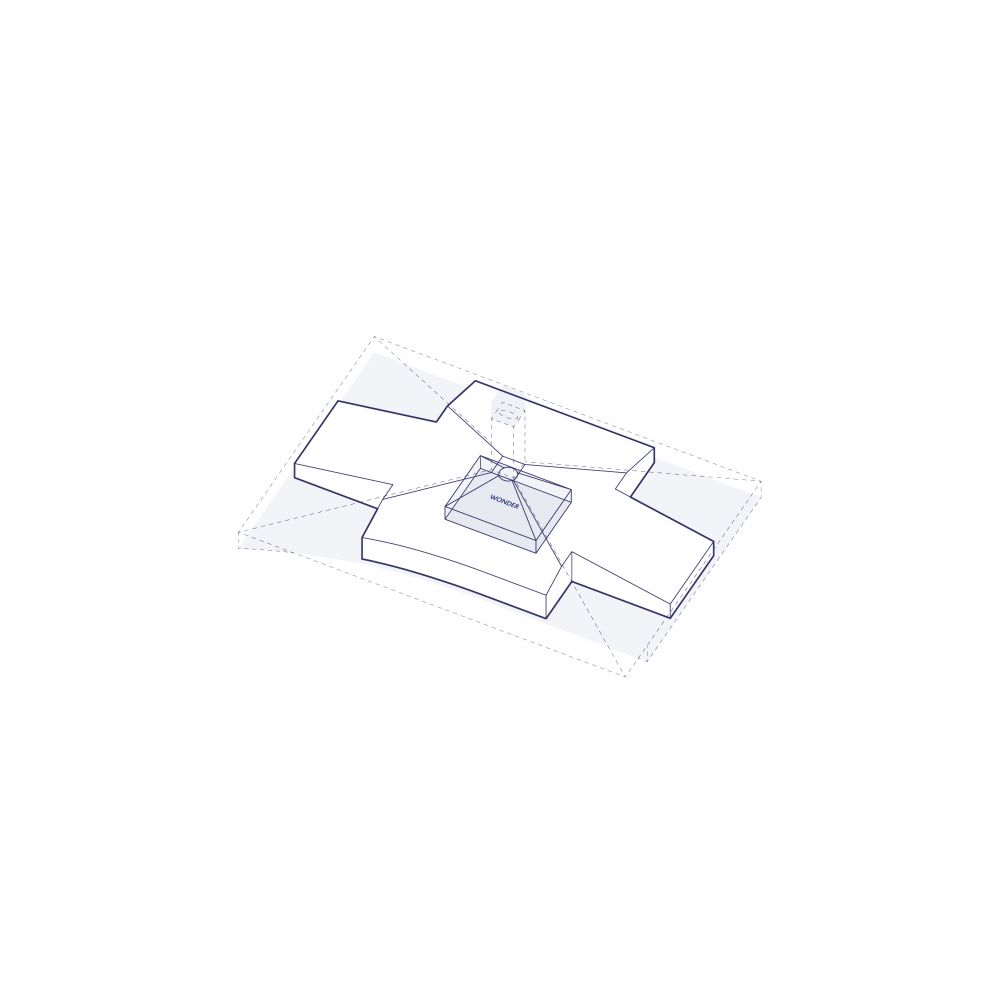 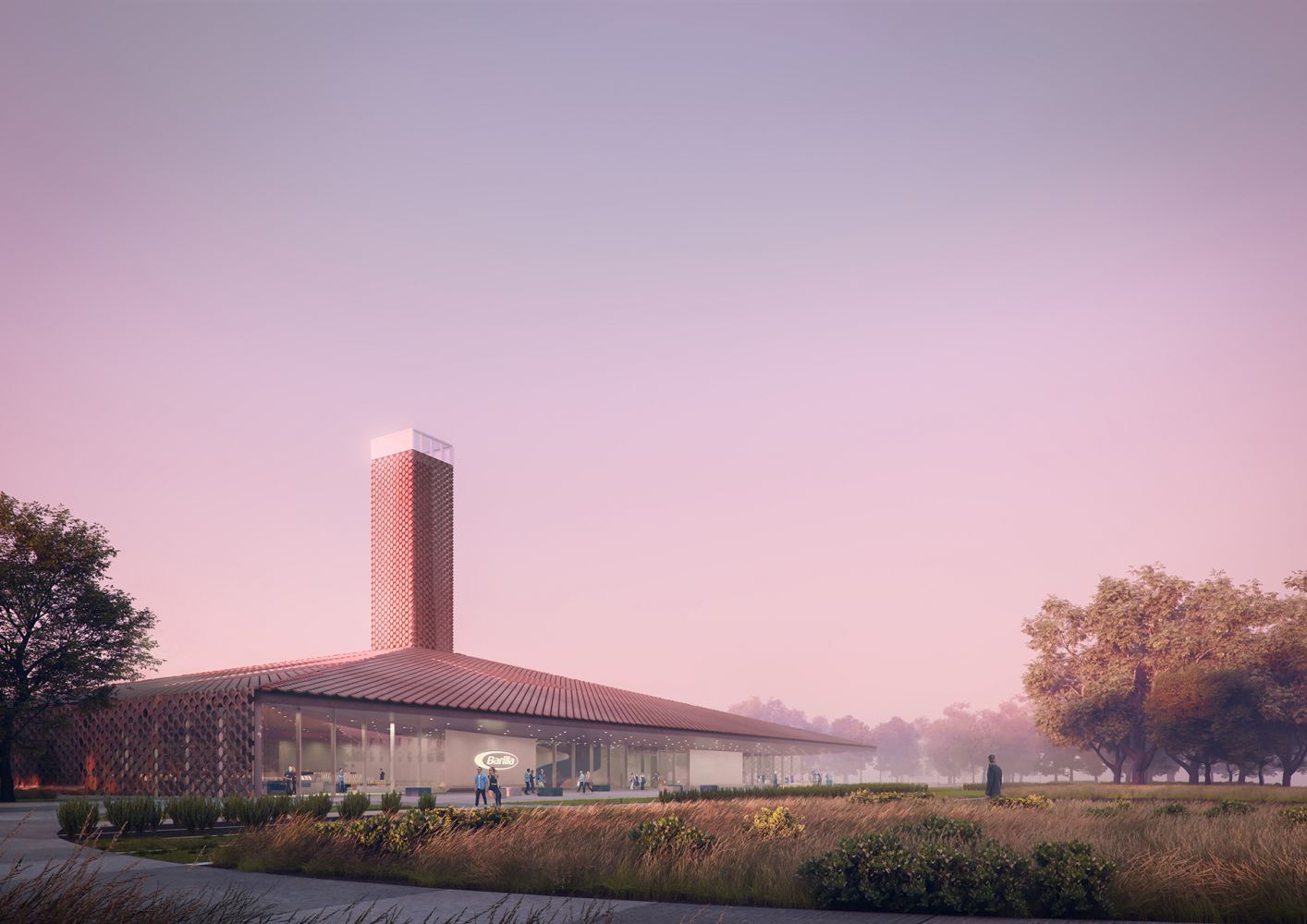 A familiar volume, hovering between the archetypes of the house and the barn, introduces a civic presence within the productive landscape. It conveys a sense of solidity and balance while playing simultaneously with the emotions stirred by the subverted scale of the architectural elements. In its simplicity, the Pavilion keeps together the two main instances of Barilla, the house and the factory, coherent with a Family Company's representation. Inside, the project provides generous spaces for research, interaction, and contemplation.

The architectural equivalent of the qualitative and timeless messages conveyed by Barilla are the archetypes. These simple, evident and self-contained shapes can acquire multiple significant. Classic or modern, local or global, they remain recognizable regardless of the cultural backgrounds. The project engages with the factory scale and provides a clear and precise formal massing that celebrates unity within diversity. The familiarity of the exterior shape transmits a sense of solidity, continuity in time, and a general sense of balance. At the same time, it plays with emotional values, the spaces' generosity, and the subverted scale of some architectural elements.

The Pavilion embodies the idea of a place for the community, an open home to shelter the activities of a Company whose concerns, the sphere of interest and actions are varied and represent the Barilla way of doing business. The proposed layout fosters interactions, promotes the exchange of information, and encourages various sorts of encounters, thus creating an interiorized urban intensity.

A varied program unfolds in this space: educational and cultural initiatives encompassing art, research, and any other form of activity capable of fostering active participation, curiosity, discovery and exchange, reaffirming the Company’s role as an active and engaged member of the community in which it was founded. Four vertical voids increase the physical interaction between the levels of the building and reveal its multifaceted reality. The visitor discovers the layered activities in subsequent steps. Each of the given programs resonates with Barilla's values and reinforces its narrative along the Pavilion.

At the heart of the Pavilion, there is a physical and mental place where new alternative futures for the community can be seeded and flourish. This space is inspired by the idea of wonder that intrinsically characterizes Barilla. Above, the signal tower defines an additional symbolic and distinctive element that marks the territory and breaks the horizontal lines of the factory facilities. This gesture stretches the envelope towards the highway, creating a favourable tension between the site and the nearby infrastructure, allowing awareness of the Barilla Pavilion even in transit. A symbolic lighthouse for a company that strives to be a reference of exemplary practices, along the whole supply chain, in the field of nutrition.

The architecture is completed by an expressive envelope that encompasses technique, style, and form. Its subtle expression is perceived to a closer look and adds an unexpected dimension to the experience. The envelope of the Pavilion inscribes itself in the general communication and advertisement strategy of Barilla. The message is clear but never obvious, playful, but not frivolous.

A system of paths connects the existing production and office area with the site. The main route carves the Pavilion, creating an impressive entrance covered by a cantilevered canopy that stretches over a new piazza. This simple act binds buildings and landscape into one entity: the revamped Barilla Campus.

The winning proposal has been assessed by renowned architects, designers, cultural managers and academics such as Walter de Silva, Lesley Lokko, Momoyo Kaijima, Davide Rampello, Matthias Schuler, along with Barilla's President and Vice-Presidents.